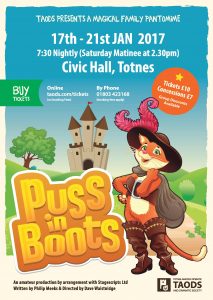 Puss in Boots, written by Philip Meeks and directed by Dave Waistnidge ran from January 17 to 21 at Totnes Civic Hall and was a great success, getting rave reviews all round. Encouragingly, good word of mouth meant ticket sales were higher than they have been for some years. We are also pleased to report that, thanks to the generosity of our patrons, we raised £330.44 for Totnes Caring.