A Brief History of TAODS 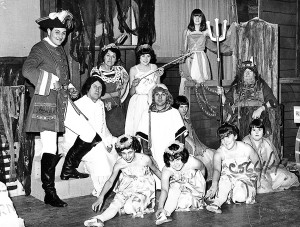 One of our first pantomimes

Pirates was performed at the assembly rooms of the Royal Seven Stars Hotel from Tuesday 20th to Saturday 24th April 1937 at 7.45pm with a matinee on Saturday. Tickets were priced at 3/- 2/- and 1/- (unreserved) and were available from the offices of the Totnes Times. Mademoiselle FiFine de la Cote was Hon. Musical Director conducting a 15 piece orchestra; costumes were hired from London; Mr Harry Leffler produced.

Despite competition from Totnes cinema’s screening of Rhythm of the Range starring Bing Crosby, the show was a sell out. On the second night it was watched by members of rival societies from Ashburton, Brixham, Exeter and Paignton who all agreed it was a magnificent production. The Totnes Times gave it a rave review.

The society had arrived.

Harry Arnold, pictured in 1948, musing about his next G & S production

At the start of 1938 TAOMS produced The Mikado. This time, the producer was Harry Arnold who had spent 30 years with D’Oyly Carte, understudying Sir Henry Lytton and playing all the leading comedy and baritone parts before touring the UK and America with the opera company as stage manager. He was to produce TAODS’ G&S shows for many years.

The cost of mounting The Mikado was £195 and including fund raising events £199 was taken, putting £4 in the bank for the next production so TAOMS, now re-named Totnes Amateur Operatic and Dramatic Society (TAODS), went into rehearsal for The Gondoliers.

On the first night at the Royal Seven Stars on 23rd January 1939, the company played to a full house largely comprising inmates of the Public Assistance Institution. Tuesday was poorly attended, but the rest of the run saw full houses with people being turned away on the last two nights, even though improved seating meant ticket prices had risen to 3/-, 2/6 and 2/-.

February 1939 saw the second TAODS annual dance to the music of Albert Hosie and his Orchestra. The Totnes Times said the society was “definitely here to stay” and a second production, Lucky Dip, was staged the same year.

In 1940 Young Person In Pink and a series of one act plays were produced, but the war was making it increasingly difficult to mount productions and Tons of Money in 1941 was the last wartime performance.

Normal service resumed in 1947 with Quiet Weekend, staged in the Old Market Hall which had been built in 1828 and converted into a theatre in 1946. The conversion required a good deal of make-do-and-mend and the new theatre featured an asbestos roof, tasteful iron girders and a stage made from materials previously used to construct the temporary platform in the Royal Seven Stars. The wiring was done by George Martin, who remained the society’s Hon. Electrician until 2000.

The Society began putting on two plays a year to finance the loss-making annual musical, then always a Gilbert and Sullivan operetta. In 1948 This Happy Breed and Candied Peel financed The Mikado; in 1949 Lady Windermere’s Fan and The Middle Watch subsidised Iolanthe; in 1950 Murder at the Ministry and Yellow Sands helped out with Pirates of Penzance (during one performance the lights went out and the audience sat patiently in the dark for quarter of an hour or so); 1951 saw Blithe Spirit and Rookery Nook assist The Gondoliers; in 1952 it was London Wall and Patience. 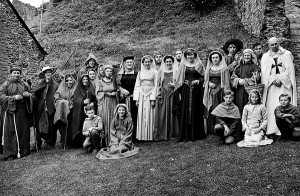 The cast of Merrie England, performed in 1953 in the grounds of Totnes Castle

There was pantomime too. Cinderella, which opened on Boxing Day 1953 to a full house, was the first and the last in the Old Market Hall which burnt down in 1955.

For the next four years the society became a wandering band of minstrels. St John’s Ambulance hall in Station Road was used for a pantomime; The Mikado and Pirates of Penzance were performed in the Barn Theatre, Dartington, and another panto was put on at Redworth Secondary Modern School (now KEVICC). 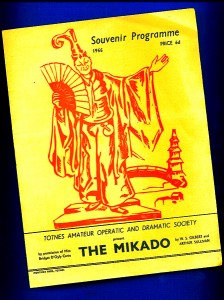 Programme from our 1955 production of The Mikado, performed at the Barn Theatre

In 1959 the new Civic Hall, our present home, was completed. The grand opening performance was HMS Pinafore and Trial by Jury; these G&S productions were still subsidised by plays, usually comedies, but audiences for G&S were beginning to fall, costs were rising and musicals had to be cancelled. By the late 1960s the society was producing plays and an annual pantomime but no musicals, although a locally written musical comedy, Willow Green by Douglas Donald, was staged in 1967.

For over ten years, the society languished until in 1983 we once again tried a Gilbert and Sullivan operetta, The Mikado. This proved to be our last G&S, but it started the pattern of ‘musical subsidised by panto’ which lasted until the late 2000s.

In recent years rising costs and falling revenues have made regular musicals harder to sustain, but the tradition of an annual pantomime in the town continues and we hope TAODS will continue to entertain the people of Totnes for many years to come.

Many thanks to Totnes Image Bank & Rural Archive for the pictures featured on this page. They come from the collection of Bill Bennett who was a member of the society for many years.